Bajaj plays the value for money card by offering a robust 125cc motorcycle for the price of a 100cc.

The CT 125X is Bajaj’s newest competitor in the 125cc commuter space and is the new big brother to the existing CT 110X. The Pune-based manufacturer has been absent from the 125cc segment for some time, and with established rivals like the Honda Shine and Hero Glamor to contend with, the CT 125X has its work cut out for it. Let’s see what it is.

In keeping with its utilitarian nature, Bajaj did well to give the CT 125X a rugged and tough appearance. Things like the fork gaiters, beefy metal engine skid plate, engine guard and luggage rack not only look good, but are also functional, and that’s something that will be appreciated by its target audience. The small headlight grille, black alloys, crankcase and body panels also help set it apart from other commuters.

The metal belly is functional and looks like it can take a beating.

The build quality is also acceptable for this price. The materials feel a bit built at a cost (well, they are), but they feel solid, which helps give off that feeling of toughness that Bajaj is looking for. The switchgear also looks basic, but is nice to use and Bajaj gave it a pass switch as well.

The CT 125X is pretty basic in terms of features, but there are a few nice touches for the price. The larger CT sibling makes do with a simple halogen headlight and analog instrumentation, but it gets LED DRL, a well-placed USB charging port and tubeless tires (unlike the CT 110), which is what buyers will appreciate.

The 124cc engine found in the CT is new to India, but Bajaj has been using it for some time in export models. This unit produces 10.9 hp and 11 Nm, which is 2.3 hp and about 1.2 Nm more than the CT 110X. Just like other Bajaj commuters, it uses an electronic carburetor, which is unique to Bajaj products in the Indian commuter segment. The company says it has worked on creating a flat torque curve, so much so that 90% of peak torque is available from 3,500 rpm all the way up to 8,000 rpm. And it’s something you actually feel once you’re there. 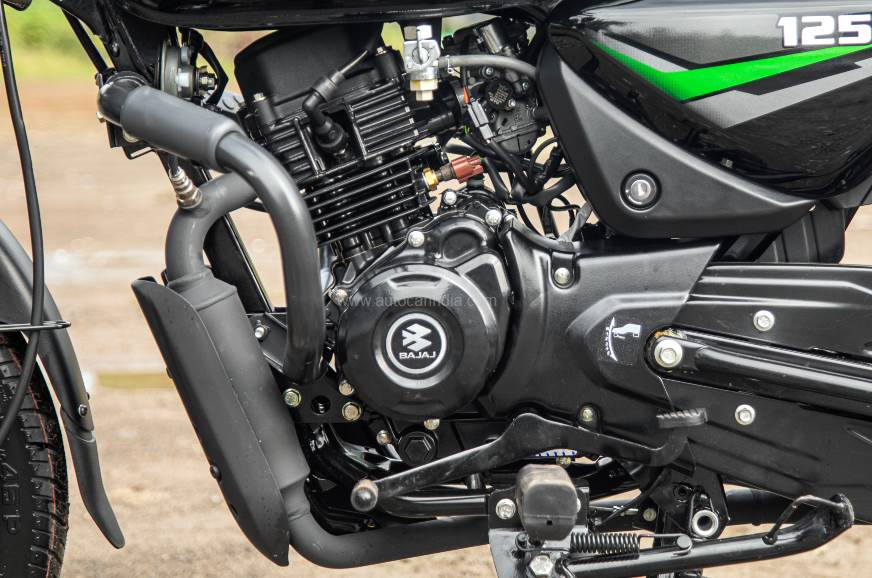 The CT 125X feels great handling and increases speed linearly, with no real flat spots in the powerband. You can even cruise around in 5th gear at 40 km/h and the CT will accelerate without too much complaining. Although we couldn’t test it, Bajaj claims the CT 125X will deliver between 55 and 60 kpl in the real world. However, refinement is one area where this engine falls a little short of the benchmark in the 125cc segment. It’s fairly smooth at normal speeds, but feels rather gruff at higher revs, which also causes some buzz in the handlebars and footpegs.

The gearbox is a 5-speed unit with an all-bottom shifting pattern, which will take some getting used to if you’re coming from the now conventional four-speed format.

The 125X, like the 110X, uses a double-cradle frame, but instead of being constructed from round tubes, Bajaj opted for a square section, claiming it increases stiffness. Suspension duties are handled by a telescopic fork and two shock absorbers, the latter being preload-adjustable. With my lightweight frame on board, the setup felt a little firm at low speeds, but it’s worth bearing in mind that this bike is designed to carry a passenger and/or other heavy loads, and that shouldn’t be a problem for most buyers. 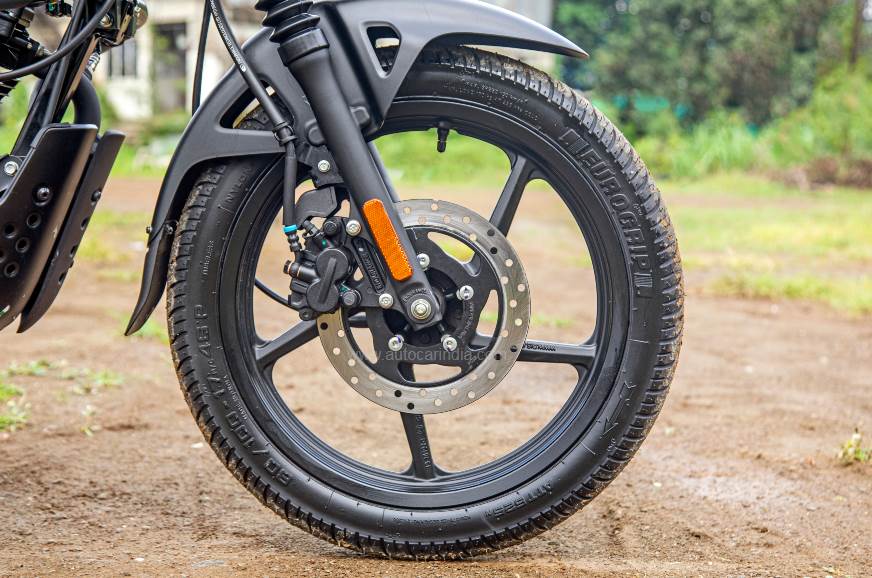 The tubeless and road-oriented tires are a point of distinction compared to the little brother CT.

In terms of wheel sizes, Bajaj has opted for 17-inchers, as opposed to the 18-inchers you see on most of its rivals. But the bike rides well, without any feeling of flight or instability, so that’s not really an issue. The company also opted to use tubeless, road-biased tires as opposed to the semi-lugged tube tires on the smaller CT because the 125 should have some capability on the highway.

As for ergonomics, you sit on the CT in an upright and comfortable manner, as one would expect of a commuter. The 810mm seat height is a little taller than its competitors, however, but most people should still be able to lower both feet with reasonable ease. Overall, driving the CT125X is an easy affair thanks to its light controls and slim dimensions. The only downside is the seat padding, which feels too firm. 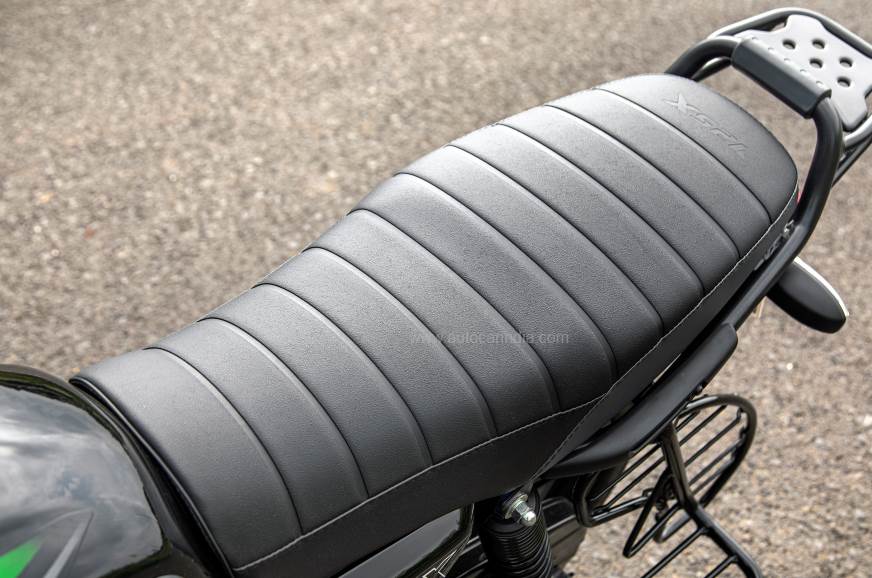 The seat is spacious but the padding is too firm.

Where the CT really scores points is in the price. With a starting price of just over Rs 71,000 (ex-showroom, Delhi), the CT 125X is priced the same as the lower capacity Hero Splendor. Meanwhile, the more capable Disc variant of the CT 125X costs Rs 74,554 and with Honda Shine and Hero Glamor starting at around Rs 78,000 and going all the way up to around Rs 82,000, Bajaj has a significant price advantage over its rivals. . 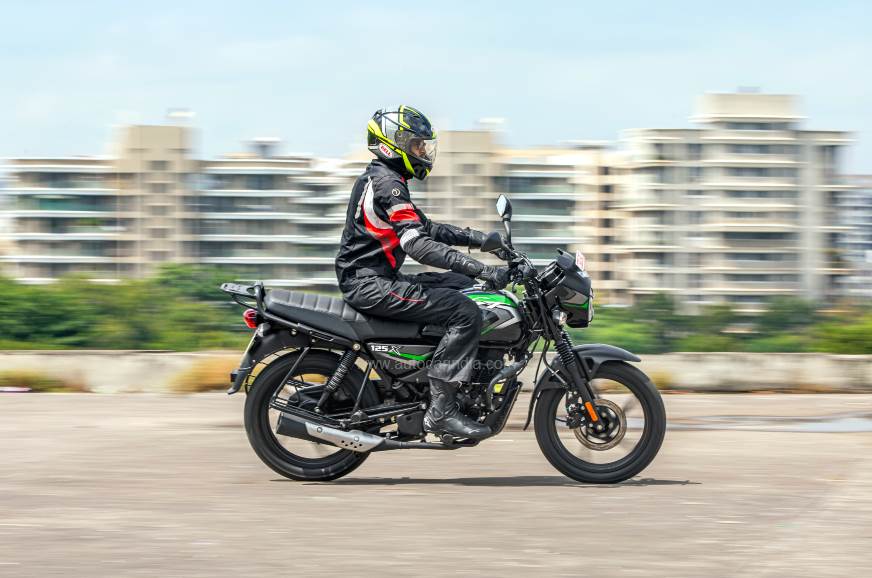 Sure, it looks built at a cost and it lacks some features you’d find in a Honda Shine, like quiet start and a kill switch, but the appeal of the CT 125X is in its tough, tough nature. And while that may not appeal to many buyers in Tier 1 cities, buyers in rural areas who just want a reliable, rugged, utility bike will see the value in the CT 125X. To top it off, buying the Bajaj will also save you around Rs 7,000 to Rs 8,000 over its competitors, which is sure to seal the deal for many.